I haven’t been to the Cairngorms much, and whenever I had in the past it was always to Aviemore, arguably the tourist centre of the Scottish Highlands. Looking at the map, I was excited at the vast areas of remote hard-to-get-to land south of Aviemore and as soon as a Hiking Club trip to Braemar was decided upon, I made sure I was free to go!

We had a late start on the Friday evening drive, and didn’t get to the Linn of Dee car park until half past midnight. Most opted to bivy outside the bus, or pitch a tent, but myself and Lorna couldn’t be bothered doing either and so spent a surprisingly comfortable night bivying on the minibus. I had the driver’s row of seats and Lorna the first row of passenger seats.

Darren had suggested going to the newly-refurbished Hutchinson’s Memorial Hut for the Saturday evening, and Lorna, Imogen and myself opted to as well. Some others went to Corrour bothy and the rest went climbing on Lochnagar. We decided to take tents as the hut is quite often too packed to stay in, and it gave us an excuse to use out our new Hilleberg Jannu which I got a few months ago.

I really do love the Cairngorms. I’m not sure what it is about them that strikes me as being so unique and beautiful – maybe the open forests of Scotts pines, or the vast rolling mountains, or the meandering streams and rivers. Or perhaps it is just because the offer some of the most remote walking available in Britain. I was thinking about this as we walked up past Derry Lodge (where many more sensible people had mountain biking up to and left their bikes) and up Glen Derry – itself a vast flat-bottom valley with a number of new tree plantations.

Lovely lighting to the west of Derry Cairngorm

There was a lot of snow about, and by the altitude of the hut there wasn’t much on the ground but snow. We dumped our camping gear, had some lunch, and headed due south towards the summit of Derry Cairngorm. A steep snow slope scattered with a few rocks offered a bit of entertainment on the way up, before Derry Cairngorm’s north-east broad ridge took us to the summit. A lot of the cloud about earlier in the day had disappeared at this point and we were left with some stunning views and equally as stunning lighting.

First proper use of our new tent!

Some useful information posted inside the hut…

I think we were all in two minds as to whether we should carry on to Ben Macdui or not, but seeing as it was a new Munro for me I decided it was worth it, followed suit by the others. This time the clouds didn’t lift and we were left with a pretty good whiteout, but at least it gave us chance to practice our navigation! Back down to the hut, and we pitched our tents on the flattest snow patch we could find, before making tea and hot chocolate for which it took about 30 minutes for the water to boil – then again it was a good deal below zero. Our route turned out to be 24km with 1200m ascent, which isn’t bad considering 13km was with camping gear!

The following day none of us had much motivation to do anything other than walk out, and so that’s what we did, making the most of the beautiful surroundings once more.

I decided that due to the brilliant weather forecast last Tuesday, I’d take a day off the PhD and head up to the Lakes with Lorna, Imogen and their Dad. I’ve been itching to do the Kentmere Horseshoe for quite a while, and seeing it bathed in the sunshine the week before whilst we drove straight past cemented the idea in my mind.

We struggled to find a parking place in Kentmere, but fortunately just as we were driving out of the village, one of the locals offered us use of his drive! The weather was just as good as we expected it to be, and we got some stunning view heading up the Garburn Pass out of Kentmere. A lot of the Lakes had a clear inversion layer just below the summits, and whilst the Kentmere hills didn’t, it was beautiful to see.

From the summit of Froswick. Great inversion layer going on in the distance!

We headed north from the Garburn Pass, over Yoke, Ill Bell and Froswick, ending up on Thornthwaite Crags. There was quite a bit of snow and it was very consolidated, which made descending some of the steeper slopes a bit tricky without crampons. The summit of Thornthwaite Crags was crowded with people and their dogs – presumably most had come up from the north as the Kentmere hills themselves were relatively quiet.

From here, it was on to Mardale Ill Bell and then down the Nan Bield Pass to Kentmere Reservoir and back to Kentmere. I took note of some of the gullies onto the Yoke – Thornthwaite ridge, and there looked to be a multitude of easy gullies and interested mixed lines that I haven’t seen described in any book. I was a bit annoyed I couldn’t take another day off and come back armed with climbing gear.

A rather busy Thornthwaite Crags.

We’ve been really lucky with the weather recently and I felt very grateful to be out in the Lakes in such good conditions.

The forecast was rather good, and so me and Lorna decided to make the most of it and head up to Keswick to do Skiddaw. We both hadn’t been up there in quite a while and it was short enough to be a good test for how my hip is doing.

All the way up the M6, the sun was out, and the Howgills in particular looked quite stunning in the early morning light. I was optimistic we were going to have a lovely sunny day out on the fells, however upon turning off onto the A66 my optimism slowly faded, as there bathed in pretty much the only clouds in the sky was Keswick and it’s surrounding mountains. As we’d driven so far our only choice was to go for it and hope it cleared up!

The summit of Skiddaw

We parked at the Latrigg car park and headed up the “tourist” route, a route I haven’t been up for over ten years now. We were into the cloud pretty much straight away, and that cloud stayed with us all the way over Little Man and onto the summit itself. There was a small break when we were traversing across to Sale How, and this gave lovely views of Blencathra. By the summit of Lonscale Fell, however, we were back in the cloud again. 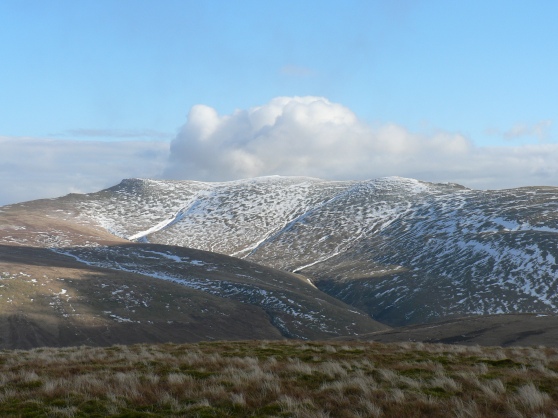 It was still great to be out in the fells again though, and we both had a fun day practising a bit of nav and bagging a few new Nuttalls (Sale How and Lonscale Fell) for me.

This weekend just gone, the Hiking Club ran a trip to Glencoe. It was touch-and-go as to whether the trip would run or not right up until the evening before, as not many people had signed up for it, but fortunately it was decided it would go ahead!

The trip was actually down as “TBC”, with Tyndrum being the other option. We finally made the choice that it would be worth the extra journey at Tesco’s in Lesmes – the decision was a necessity at this stage as if we were to be staying in Tyndrum, we’d have to stock up on beer as there wouldn’t have been the Clachaig down the road from the campsite!

We arrived just before midnight and after pitching our tents and deciding on a 8am departure time in the morning, went to bed. My hip is still bothering me, but I decided that Buachaille Etive Beag might be an option as it’s northern summit is only a few kilometres from the road. Alex, who is going in for his Winter ML assessment in a few weeks, decided that would also be a good chance to get some nav and winter skills practice in. Lorna and Laura also came along with us, whilst the rest opted for the Aonach Eagach.

The weather was rather good, with only bits of cloud scattered about. We worked our way up the usual route to the col, picking out interesting contour features on the OS 1:50 map and trying our best to find them exactly. I tend to use Harvey’s BMC 1:40 maps and I was quite surprised when comparing this against the OS at how much more detailed the Harvey’s are – especially when it comes to contour lines. The 15m intervals, as opposed to 10m on the OS, makes them much easier to read (and negates the necessity for fading out contour lines like the OS do).

From the col, we branched north and up the rocky ridge to the summit of Stob Coire Raineach, admiring the extensive views over the Bidean range to the west and Buachaille Etive Mor to the east. The summit itself was quite airy, and though not pinnacle-like in the slightest, still offered a good deal of exposure.

Back down to the col and my hip was still feeling okay, so I decided it would be worth doing the southerly summit, Stob Dubh, as well. The decision was cemented in place upon seeing the Alpine-esque snow ridge that lead to the summit. After cautiously negotiating a wind-slabbed snow-loaded slope, with last week’s tragedy on Bidean fresh in our minds, we gained the middle summit of the Buachaille and then pressed onwards along the aforementioned snow ridge. What with the sun, still air and narrow snow ridge, it really did feel like we were in the Alps. We must have spent at least twenty minutes on the summit, admiring the breathtaking views down Glen Etive and again over the Bidean range.

Lorna and me on the summit of Stob Dubh

On the way down, we made use of the good snow covering to make some snow bollards, bucket seats and stomp belays. I’d never used a stomp belay and I was surprised at how strong it was. A platform is “stomped” out in the snow, big enough for your two feet, and then your ice axe is buried shaft down in the snow. The rope is then cleanly passed through a caribiner attach to the head of the axe, and then run across your back and over the opposite shoulder, giving enough friction to hold the your partner.

As always, the Clachaig provided great craic on Saturday evening, with entertainment from a lively folk duo who’s name unfortunately eludes me. On the Sunday, Lorna and myself had intended to go ice climbing at Kinlochleven’s Ice Factor, but there were no spaces left when we arrived, and so instead we took a windy and wet drive down Glen Etive.

The Clachaig on Saturday night

Fingers crossed this is the start of a full recovery for my hip!